TRADE UNION IS AN OPERATIONAL CREDITOR UNDER IBC : SUPREME COURT 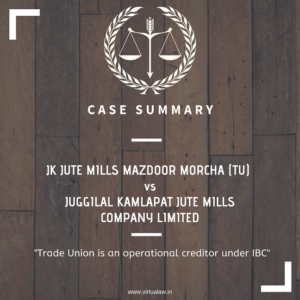 1. Issue in Consideration: This appeal addresses an important question of law as to whether a trade union fits within the definition of “Person” u/s 3(23)(g) of the Insolvency and Bankruptcy Code, 2016 (“IBC”) i.e. “Any other entity established under a statue, and includes a person resident outside India” and can a trade union be considered as an operational creditor.

2. Brief Facts of the Case: JK JUTE MILLS MAZDOOR MORCHA (the “Trade Union”) issued demand notice on behalf of the three-thousand (3000) workers u/s 8 of the IBC for outstanding dues of workers. This was replied by the JUGGILAL KAMLAPAT JUTE MILLS COMPANY LIMITED (“Corporate Debtor”) on March 31, 2017.

3. Arguments: Appellant: The Appellant has argued that the trade union has an authority to appear on behalf of their union members before the Tribunals under the IBC by quoting various provisions of the IBC, 2016 and the Trade Unions Act, 1926.

The counsel for Appellant cited a Division Bench judgment of the Bombay High Court in Sanjay Sadanand varrier vs Power horse India Pvt Ltd (2017) 5 Mah LJ 876 to argue that even literally speaking, the provisions of the code would lead to the result that a trade union would be an operational creditor within the meaning of the IBC.

Respondent: The counsel for the respondent relied on the order passed by the NCLAT that no services are rendered by the trade union to the corporate debtor to claim any dues which can be termed as debts and hence, the trade unions will not come within the definition of operational creditor. It was further argued that each claim of a workman is a separate cause of action for which there are separate dates of default and accordingly, a collective application under the rubric of a registered trade union would not be maintainable.

Respondent has cited the judgment of the Supreme Court in Commissioner of Income Tax (TDS), Kanpur and Anr. Vs Canara Bank (2018) 9 SCC 322 (click here to read our case study on this case). This judgment dealt with the expression “established by or under a Central, State or Provincial Act” contained in Section 194-A(3)(iii) of the Income Tax Act, 1961. After brief study of the above cited judgment, it was argued that trade union does not fall under the section 3(23) (g) of the IBC.

4. Case Analysis Section 3(23) of the IBC defines the term “Person” as follows: 3. In this code, unless the context otherwise requires, – … (23) “Person” includes- a. An Individual; b. A HUF; c. A company; d. A trust; e. A Partnership; f. A LLP; and g. Any other entity established under a statue, and includes a person resident outside India. …

5. Conclusion The Hon’ble Supreme Court held that a trade union is certainly an entity established under statue namely, the Trade Unions Act, 1926, and would fall within the definition of “Person” under Section 3(23) of the IBC.

It was further held that an “operational debt”, meaning a claim in respect of employment, could certainly be made by a person duly authorized to make such claim on behalf of a workman. Form 5 of the Insolvency and Bankruptcy (Application to Adjudicating Authority) Rules, 2016 also recognizes the fact that claims may be made not only in an individual capacity, but also conjointly.

It was finally ruled as follows: “Looked at from any angle, there is no doubt that a registered trade union which is formed for the purpose of regulating the relations between workmen and their employer can maintain a petition as an operational creditor on behalf of its members.”