WHY DID UK PM THERESA MAY RESIGN? 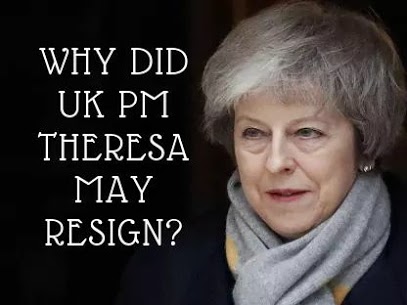 Mrs. Theresa Mary May graduated from the St Hugh’s College, Oxford in the year 1977. May made her political entrance after being elected to be the Member of Parliament (MP) for Maidenhead in the year 1997. After a 13 year journey in UK politics she served as the Home Secretary from 2010 to 2016 and as Leader of the Conservative Party from 2016 after the resignation of Mr. David Cameron in July 2016, after Britain voted to exit European Union.

Soon after, May was elected as Conservative Party Leader unopposed by party members, becoming Britain’s second female Prime Minister after Margaret Thatcher. Even though the general election had not been due until May 2020, May called for snap elections which was ratified by the requisite majority of the Parliament. It was a strategy from May to secure a larger majority so as to have a strong say in the Brexit Negotiations. Though, the Conservatives emerged victorious, they formed the minority government which totally destroyed the strategy.

With this brief introduction let us jump into each of the 5 reasons leading to the resignation of the UK PM Theresa May.

Owing to several reasons, best known to the people of UK, Theresa May, on May 24, 2019, announced that she’d resign from her office as Prime Minister with effect from June 7, 2019. After such a tremendous career in politics what led her to step back from her position at a time when the UK needed a stable leadership? Team VirtuaLaw made its research to identify five (5) probable reasons which paved way to the end of the political journey of a legendary politician.

Article 50 of the Lisbon Treaty

Theresa May triggered Article 50 of the Lisbon Treaty on March 29, 2017 and hence the negotiating period of two (2) years started from that date. However, the snap elections held in 2017 did not make it easy for Theresa May to deal with Brexit as efficiently as she had visualised.

Theresa May had time and again used this phrase “Brexit means Brexit” implying that the terms of withdrawal shall be successful and that there is no other way out than Brexit. However, it was limited just to her speech but not to the reality. In reality, the approach towards Brexit wasn’t much in her favour as the House of Commons had rejected her proposal of withdrawal terms thrice.

No Deal better than a Bad Deal

Theresa May made it a point to say “No Deal is better than a Bad Deal” giving a vibe to the people of UK that there is a possibility of a No Deal Exit which was not well taken by the public. The Parliament mocked at her for the statement. Later she clarified saying that a Deal is always what they wanted, but the damage had already been done.

The deal May negotiated with the EU was rejected by the House of Commons thrice.

The Parliament first voted on the 500 and odd pages withdrawal agreement on January 15, 2019 wherein the Members of Parliament voted 432-202 to reject the agreement, the biggest defeat for a government in the House of Commons in the recent history.

MPs voted against her deal by 391-242 votes on March 12 and finally on March 29 yet again her proposed deal was rejected by a margin of 58 votes.

She wasn’t able to gain the confidence of the Parliament in respect of a smooth Brexit.

Time and again Theresa May reassured that Brexit will happen by March 29 at any cost but she was proved wrong and this is one major reason which might have persuaded her to resign.