FLIPKART-WALMART: An analysis of the Takeover 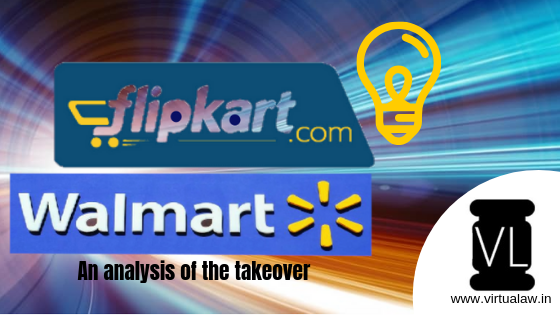 The Indian e-commerce sector is expected to grow by 1200% to $200 billion (30% CAGR) by 2026 from $15 billion in 2016, and everyone now wants the biggest bite from this cake. The recent acquisition of the Indian e-commerce stalwart Flipkart by the retail giant Walmart for a whopping sum of $16 billion makes this more evident. This brownfield investment puts Walmart directly on the map of Indian e-commerce market ahead of its global rival Amazon. While there is so much buzz around this deal from the small retailers opposing this, and from the millennials excited about this, we look forward to analyse what is in it for all the stakeholders in this deal.

What is in it for Walmart?

Flipkart is the largest e-commerce player in India, and acquisition of Flipkart adds a userbase of 175 million registered users to Walmart’s already enormous customer base.

“e-kart” the supply chain arm of Flipkart serves more than 800 Indian cities making 50,000 deliveries a day on an average. This helps Walmart to connect to majority of the population centres of urbanising Indian demographic. Also, Walmart’s experienced strategies in supply chain management would lead to increased efficiency in e-kart’s operations.

Indian e-commerce space is turning super lucrative. As mentioned above, it is expected to grow with at 30% CAGR. Flipkart Amazon, Paytm and Snapdeal are the top players in the Industry currently. And with the Companies like Jio have announced their plans to enter into this industry, the Walmart’s acquisition of Flipkart gives it the early entrant advantage, helping it in higher penetration of the market and better awareness among the consumers for the brand. The Flipkart investment transforms Walmart’s position in a country with over 1.3 billion people, strong GDP growth, a growing middle class and significant runway for a smartphone, internet and e-commerce penetration.

Large data of Indian shoppers will be shared with the US retail giant. Real time data analysis can help in identifying the consumers & their needs better than domestic players.

Walmart is looking to extend its supply chain arm through partnerships with around 60 lakhs Kirana Stores. This can increase the market presence of small stores.

What is in it for Flipkart?

The acquisition by Walmart boosted the valuation of Flipkart to approximately $21 Billion (from approximately $12 Billion before the deal), making it the most valued startup in Indian eco-space, beating Ola, Snapdeal, Oyo and many others.

Walmart has also stated that it is planning to infuse further investments to develop the market infrastructure of Flipkart.

What is in it for the Bansals?

Sachin Bansal, the group Chairman and Co-founder of Flipkart has sold his total share of 5.5% in the Company for a staggering sum of about $ 1 billion (~Rs. 700 Crore), and has exited from the Company as the Walmart did not see a role for two Co-founders in the Company.

While the other Co-founder Binny Bansal stayed on board, after selling his stake of around 5% for $1.04 billion, held approximately 4.2% stake post partial dilution of his stake. Binny Bansal was later made to exit the Company with allegations of improper conduct.

What is in it for the Government?

Walmart has bought the stake in Flipkart Singapore, which is the holding Company of Flipkart India. So, none of the investments from the Walmart-Flipkart route would be directly flowing into India. However, Walmart has paid approximately Rs. 7500 Crores in form of withholding tax on payments made against acquisition of shares from 10 Shareholders out of the Total 44 shareholders.

The investment of Walmart in Indian Start up ecosystem also gave a much needed boost for FDI, as it increased the confidence in Indian markets among foreign investors.