THE DEBT TRAP DIPLOMACY – A CASE STUDY OF CHINA 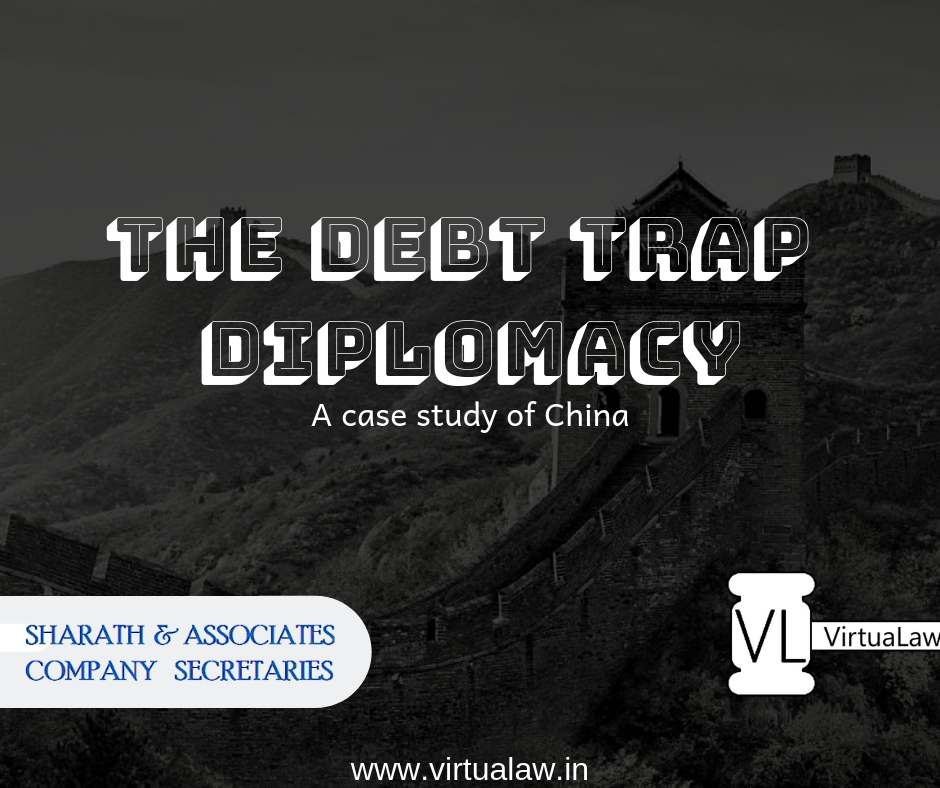 Debt-trap diplomacy is a type of diplomacy based on debt carried out in the bilateral relations between countries. It involves one creditor country intentionally extending excessive credit to another debtor country with the alleged intention of extracting economic or political concessions from the debtor country when it becomes unable to honour its debt obligations. The conditions of the loans are often not made public and the loaned money is typically used to pay contractors from the creditor country. This is an extension of the well-known strategic foreign policy which openly uses economic aid and investment between countries to curry diplomatic favours.

China’s Belt and Road Initiative (BRI) can be said as the leading example of Debt Trap Diplomacy. BRI hopes to invest an estimate of US$ 8 trillion in infrastructure financing to 68 countries in Asia, Europe and Africa most of which are under developed. Critics of Chinese lending practices allege that many loans associated with China’s Belt and Road Initiative to build infrastructure projects using Chinese contractors in strategically located developing countries are a type of debt-trap diplomacy. Critics in both the western, Indian and African media have also criticised the secretive conditions of the loans as well as their high interest rates.

While most countries along the Belt and Road initiative welcome foreign investment and assistance in building modern infrastructure, the pressure being exercised by Beijing doesn’t always go down well. Countries on the receiving end of Chinese cash are starting to realize that when all is done and dusted, the infrastructure that is built is likely to end up controlled by China. A common pattern has been for China to sign controversial projects when a pro-China government is in place—as was the case with Sri Lanka’s former president Mahinda Rajapaksa and the Hambantota port deal—only to see them revisited once less receptive administrations are in power.

Even small loans go a long way in countries like Tonga, Vanuatu and Papua New Guinea, but the ability to repay or negotiate refinancing is testing Pacific governments who must now make politically unpopular decisions to service the debts. Last year, with more than US$ 1 Billion in debt after taking a series of high interest loans under the BRI Srilanka has handed over a controlling stake and a 99-year lease on the strategically important Hambantota Port to China. Now Djibouti, home to US military’s base in Africa looks to cede control of another port to Chinese government’s linked company.

This month, Tonga will begin a repayment schedule for a US$ 115 million loan from China to redevelop infrastructure in its capital Nuku’alofa and expand infrastructure in rural parts of the island. For China, the US$ 115 million loan is barely a rounding error in its estimated US$1 trillion BRI budget. For Tonga, however, it’s almost one-third of its annual gross domestic product and will double the island’s national debt load.

Papua New Guinea (PNG) and Vanuatu are also expected to face debt stress as loans mature in the coming years. PNG owes China nearly US$ 2 billion arising from concessional loans, or nearly a quarter of its total debt. For Vanuatu the situation is more extreme, with loans owed Beijing representing around half of its external debt.

The Countries practicing the debt trap diplomacy encourage dependency using opaque contracts, predatory loan practices, and corrupt deals that mire nations in debt and undercut their sovereignty, denying them their long-term, self-sustaining growth. In simpler words, they offer the honey of cheap infrastructure loans, with the sting of default coming if smaller economies can’t generate enough free cash to pay their interest down.

Centre for Global Development in its report has analysed that of the nations participating in the Chinese plan, eight nations will find themselves vulnerable to above average debt: Djibouti, Kyrgyzstan, Laos, Maldives, Montenegro, Mongolia, Pakistan and Tajikistan. 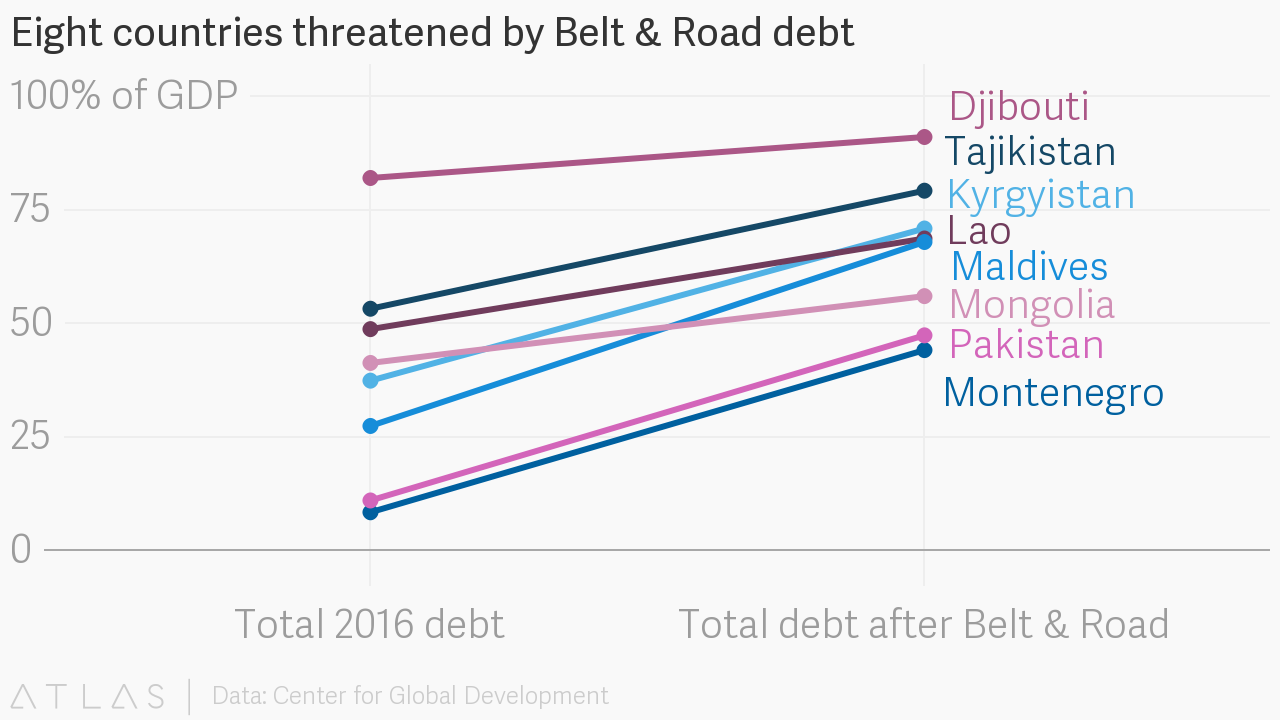 In countries suffering from debt distress, the Chinese government has provided debt relief in an adhoc, case by case manner, and is forcing smaller countries abide by its dictates, affecting their sovereignty. It has generally refrained from participating in multilateral approaches to debt relief, though it does participate in debt relief discussions at the international financial institutions and engages informally with IMF staff on individual country cases. This contrasts with other major official creditors, all of whom participate actively in multilateral mechanisms dealing with sovereign defaults, in particular the Paris Club. While China is an observer at meetings of the Paris Club, it is not a member, so it is under no obligation to act in solidarity with Paris Club members or even to inform the Paris Club about the management of its credit activities.

Without a guiding multilateral or other framework to define China’s approach to debt sustainability problems, we only have anecdotal evidence of ad hoc actions taken by China as the basis for characterizing the country’s policy approach.

China has also demonstrated a willingness to provide additional credit so a borrower can avoid default. A prominent example is China’s agreement in early 2017 to extend an RMB 15 billion swap line to Mongolia for three years in support of an IMF Extended Fund Facility.

But despite ad hoc approaches to the treatment of debt problems, there are some signs that Chinese officials are moving toward greater policy coherence and discipline when it comes to avoiding unsustainable debt. For example, in November 2017, the China Banking Regulatory Commission issued its first ever regulations for China’s policy banks, emphasizing greater risk controls for the overseas activities of China Development Bank, China Exim Bank, and the Agriculture Development Bank of China. However, these regulations only seem to be a cover to avoid the fire from foreign media houses and public in general.

While China’s aggressive investments have definitely filled in the gap created by the reduction of investments from USA and west, the real problem appears to be the opaque, unclear, and shady intentions of the Chinese Government, and that can be addressed only through bending the hand of China through multilateral forums. China needs to design a sustainable debt planning if it and its partners in BRI want to mutually reap the benefits and maintain their sovereignty. But if China’s main intention is to take control over the foreign governments, the partner countries should properly analyse its offers. Countries like Nepal, and Myanmar have realized this, and already backed away from a few Chinese Projects. But other smaller and under-developed countries may find it much more difficult to refuse any such funding as such an infusion would immensely help their Country’s economy even though for a short term. BRI is a double-edged sword, and there is no margin of error for its partners.