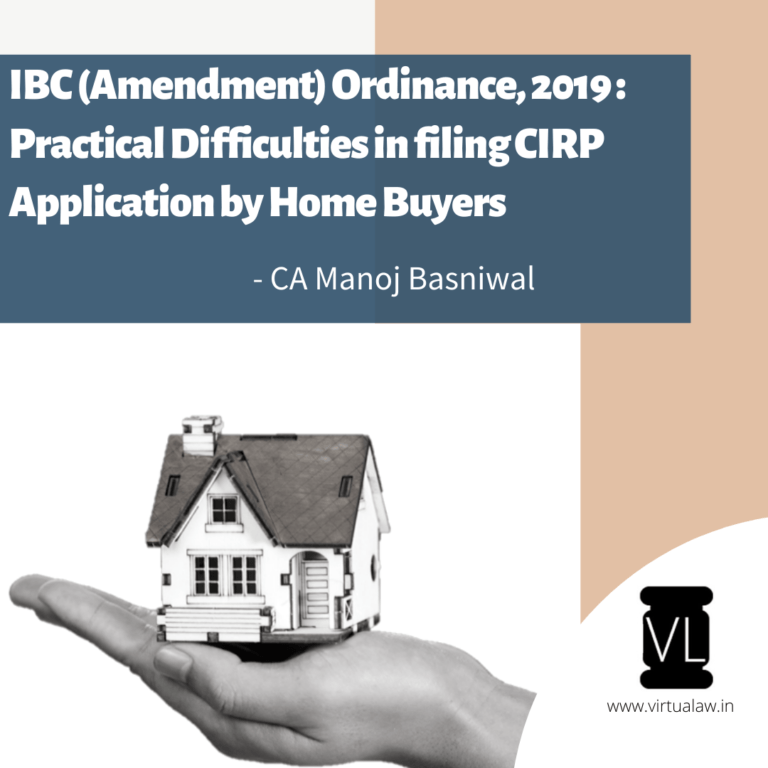 The Insolvency and Bankruptcy Code (Amendment) Act, 2019, amended the definition of financial creditor to include real estate allottees (Homebuyers, in normal parlance). With this amendment, homebuyers were given the status of financial creditors (F.Cs) and the same has been affirmed by the Hon’ble Supreme Court in Pioneer Urban Land and Infrastructure Limited v. Union of India (2019).

Now, on 28th December, 2019, the Insolvency and Bankruptcy Code (Amendment) Ordinance, 2019 was notified. Along with other sections, section 7 of the IBC was amended through section 3 of the ordinance. The section 3 of ordinance is as follows:

In section 7 of the principal Act, in sub-section (1), before the Explanation, the following provisos shall be inserted, namely:—

This amendment via second proviso curtails the right of a single individual allottee to file for an application u/s 7 of the IBC. The proviso specified the minimum number required for filing an application for initiating CIRP against the developer, i.e. one hundred of such allottees or minimum of ten percent of the total allottees in same real estate
project. However, this amendment is not only bad in law since it differentiates financial creditor in respect of filing of application u/s 7 but also it will be practically impossible to file an application by the allottees against the developers.

Legal/ Constitutional validity of the amendment has already been challenged and the matter is pending before the Hon’ble Supreme Court of India. Irrespective of whether this amendment is held constitutionally valid or not, there would be number of practical difficulties which would be faced by the allottees in complying with the above proviso i.e. to get the requisite numbers of the allottees for filing an application. I would like to highlight some of the difficulties which would be faced by the allottees which are as follows:

1. To get the requisite number of allottees in a real estate project:

a.      Getting requisite number of allottees when all the apartments are being sold in the same real estate project:

Practically, an allottee knows who his/ her neighbor is only after allottees gets the possession of the apartment and moves to live there or if he doesn’t move to live there then only in annual general meetings of the building or township. Even if he occupies the apartment, it is practically difficult to know one hundred allottees. In such circumstances, it would be really difficult to get the name and contact details of the allottees in the project who would be aggrieved by the delay in completion of the real estate project and also would be aware of liquidity issue of the developer. NO law directs the developer to share the list of all the allottees in the real estate project, even RERA, 2016 does not
contain any provision which states that the list of the allottees should be shared with each and every allottee of the same real estate project.

Therefore, it would be not only difficult but practically impossible to file an application for initiating CIRP against the developer who has delayed the completion and possession of the real estate project.

b.      Getting requisite number of allottees when only few apartments have been sold in the same real estate project

What if the developer has not sold all the apartments/ units in a real estate project, then how the 10 percent of the total allottee will be calculated? To answer this question there will be various litigations. As per section 2(d) of the RERA, allottee means any person to whom apartment or plot has been allotted, sold or transferred by the developer. Further to avoid CIRP, developer will allot apartments to the dummy or related allottees by taking booking or token amount as low as Rs. 1,000/- as a consequence of which a genuine or non-related allottee will never able to get the requisite numbers to file an application u/s 7.

My suggestions to overcome these practical difficulties:

In RERA, 2016, only disclosure of number of units i.e. apartments booked/ allotted need to be disclosed but not the name and contact details of the allottees in the real estate project. If units / apartment wise disclosure is made in a format similar to the one given below then it would be easier for all the allottees to come together and file an application for initiating CIRP against the developer. However, such disclosure can be made only on RERA website for which amendments in RERA, 2016 would be required.

a.     One Township or Complex may have different real estate projects consisting of each building as a single real esta project.

Now, for example, if an allottee had purchased a flat in one of the building or one of the wings of the building in a big township consisting of 500 apartments. If on the possession date, the real estate project is incomplete and way far from completion, if an allottee needs to file an application then he needs to get the requisite number from the same real estate project i.e. from the same wing or same building of the township. Even though allottees from different wings or buildings of the same township come together to have a requisite number to file an application for initiating CIRP, they will be still be unable to file for it since they do not belong to SAME REAL ESTATE PROJECT even though they belong to same township of same developer.

An application u/s 7 can be filed only when a default has occurred. Now what is default in case of allottees is again a matter of litigation. Default can be on account of following two reasons:

i.     Delay in delivery of possession; or

ii.     Non-payment of compensation for the delay in delivery of possession.

Now, considering the first case, delay in delivery of possession:

If delay in delivery of possession is taken as default (if decision in Pioneer urban Land and Infrastructure Ltd. v. Union of India (2019) interpreted receiving possession as ‘consideration for the time value of money’) then whether such default should be for one allottee or for all the requisite allottees who would be filing an application u/s 7. Even though the format of the Agreement for Sale (AFS) is same the commercial terms like price, date of possession, compensation in case of delay in possession, etc. changes with each and every allottees. Also possession date are also extended if there is an event occurred which falls into force majeure.  In such case it would be difficult or simply IMPOSSIBLE to have all the requisite allottees as a same date of possession which can be termed as there has been default. Thereby, allottees are deprived of taking advantage of IBC for resolution of the developer.

Second case of default may be due to Non-payment of compensation for the delay in delivery of possession:

If the default is taken as non-payment of compensation for delay in possession of apartments (view taken by NCLT in Pawan Dubey v. J.B.K Developers (2018), then whether the default amount i.e. non-payment of compensation should be more than Rs. One lakh rupees cumulative and whether all the allottees need to have default amount of rupees one lakh rupees is a question to be pondered upon. Also if the date of possession is different for different allottees then default made by developer would be PRATICALLY impossible due to following reasons:

–       The developer will start paying compensation only when the amount of compensation exceeds rupees one lakh;

And even after above two, the developer fails and there is requisite number for filing an application u/s 7, it would be TOO late and the value of assets might have reduced to a considerably low level from which resolution would not be possible at all.

The above difficulties are very much practical and foreseeable. Also, these difficulties would not be faced by other class of financial creditors since they have more or less same transactions at the same time. Also there is someone like Debenture Trustee, etc. to coordinate and overlook the process.

Also, in the Pioneer judgment, Supreme Court has laid down the checks and balances which will be seen by the NCLT before admission of an application u/s 7 filed by an allottee by which NO non genuine allottee will able to drag a developer in CIRP. With this, the amendment to section 7 will virtually take allottee’s (homebuyer’s) right to file insolvency application against the developer.

It is not hidden fact that real estate projects are facing huge delay in completion and handing over the possession to its allottees, the same was also stated in Insolvency Law Committee Report, March 2018 and Pioneer judgment.

Real Estate Projects should be divided broadly into two categories:

1. Real estate projects which were incomplete as on 1st May 2017, also known as On-going projects as per RERA.

2. Real estate projects which commenced after 1st May 2017, also known as NEW projects as per RERA.

The division of real estate project is important to understand because the amount realized from the allottees after 1st May 2017 have to be kept in a separate account and to be used as per section 4 of the Real Estate (Regulations and Development) Act, 2016 (‘RERA’) i.e. seventy percent of the amount realized from the allottees of a particular real estate project will be used only for land and construction cost of that project only. Also for the withdrawal of such amount, certification is required from an engineer, an architect and a chartered accountant thereby reducing the chances of misuse of funds which is currently the case with many real estate developers.

The projects launched after 1st May 2017 compulsorily require RERA registration which will be given after the said real estate project has requisite permission for the development and construction from the appropriate authority thereby again reducing the chances of delay in completion of the real estate project.

But the real estate project which are still not completed (even after 3 years of implementation of RERA) are the projects which need to be resolved through IBC. Many of such projects are in bad shape and facing long delays. Major reasons for such delays are financial issues, insolvent developers, etc. which would be resolved only by IBC and not by RERA. It is also a fact that RERA orders are passed by RERA Authority or RERA Tribunal as the case may be. BUT execution of such orders if not complied by the
developer, is made by land revenue dept. (collector or Tahsildar) which is very time-consuming process. Further, land revenue dept. is also helpless since major of the assets are already mortgaged with other financial creditors of the developer.

Therefore, the proviso requiring minimum number of allottees required for filing an application u/s of 7 IBC should be removed and explanation to the section 3(12) i.e. default should be added to reflect that only those real estate projects which have been delayed AND are unable to pay compensation will be brought under the ambit of IBC.