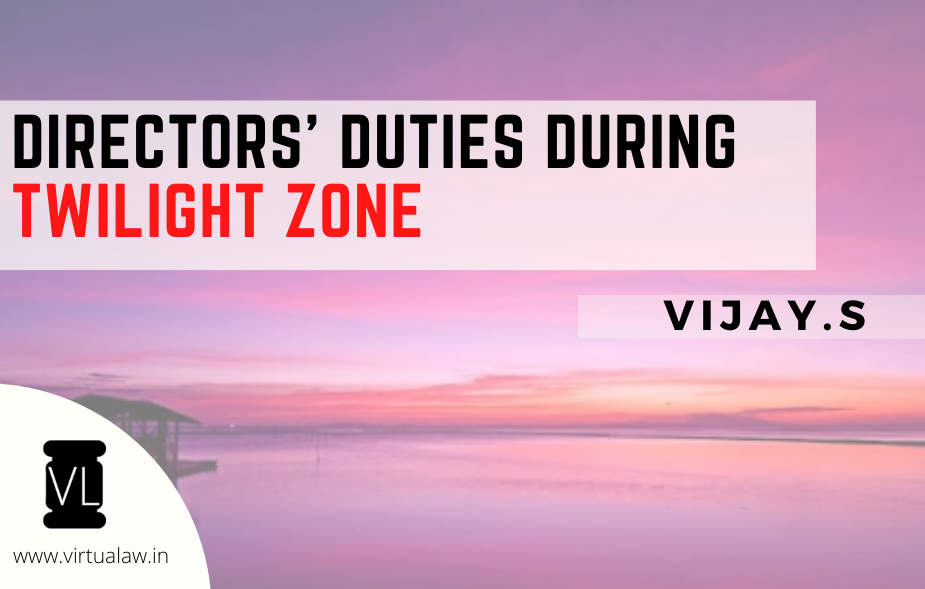 In addition to the settled position of this change in the duties of the director, the Insolvency and Bankruptcy Code, 2016 (“Code”) reroutes the duties of the director towards the general body of the creditors by stating that when the director knew or ought to have known that there was no reasonable prospect of avoiding CIRP, he should have exercised due diligence and duties towards the creditors minimizing their potential loss[2].

Now, the question arises as to when does this twilight zone commence (the period when the director knows or ought to have known prospective insolvency). This question was addressed in the case of BTI v Sequana where the Court of Appeal considered four possible points in which the duty of the director could have been triggered: –

1. When the company is actually insolvent, either on cash flow or balance sheet basis.

2. When the company is on the verge of insolvency or nearing or approaching insolvency.

3. When the company is or is likely to become insolvent (i.e., it is of dubious solvency).

4. When there is a real as opposed to remote risk of insolvency.

After considering all the four possibilities of trigger, the Court of Appeal found that the third test would be the most appropriate test. It had also emphasized that likely means “probable” and not some lower test.

When the duty of the director is found to have been triggered, the test applied by the court attributes to the director in question, the amount of knowledge that a reasonable person in their position would possess (objective test). In case the director had been found not to have exercised due diligence to minimize the losses of creditors during the twilight zone, he/she shall be subjected to personal liability.

1. Do not assume that the safest course is to stop trading. It is essential to obtain competent outside advice as to whether to stop trading or continue.

2. Consider carefully with your fellow directors whether the business is viable.

3. Insist on frequent board meetings.

4. Make sure that there is a proper distribution of responsibility within the company.

5. Make sure there is up to date accounting records.

6. Ensure that the board regularly receives updated budget.

7. Get the company to take appropriate outside, professional advice on suitable remedial measures.

8. Keep major creditors regularly informed and enlist their support for continuous operation of the company.

9. Ensure that you are kept fully in picture and all directors agree so far as possible on what needs to be done.

10. Consider the advisability of putting the company into administration (Section 10 of IBC in the Indian context).

11. Ensure that all the recommendations by all the directors including assent and dissent are fully minuted and circulated to all other directors.

12. If you are in the minority and your recommendations are repeatedly rejected so that the company is getting deeper into the mire, resign and record your reasons for doing so in a letter. But resignation is very much the last resort. A director who simply resigns without having taken every step he should have done to minimize loss to creditors will not escape liability. So do not resign before you have gone as far as you can in getting things put right.

These points would serve as an essential guide to the directors of Companies like Vodafone, which may be in the twilight zone due to the Supreme Court’s recent order to pay AGR dues. With the jurisprudence of IBC getting clearer with time, the duties of directors during twilight zone is yet to be tested in India.