NCLT HAS THE POWER TO EXCLUDE THE PERIOD OF DELAY IN APPOINTING THE “RP” IN PLACE OF THE “IRP”: NCLAT 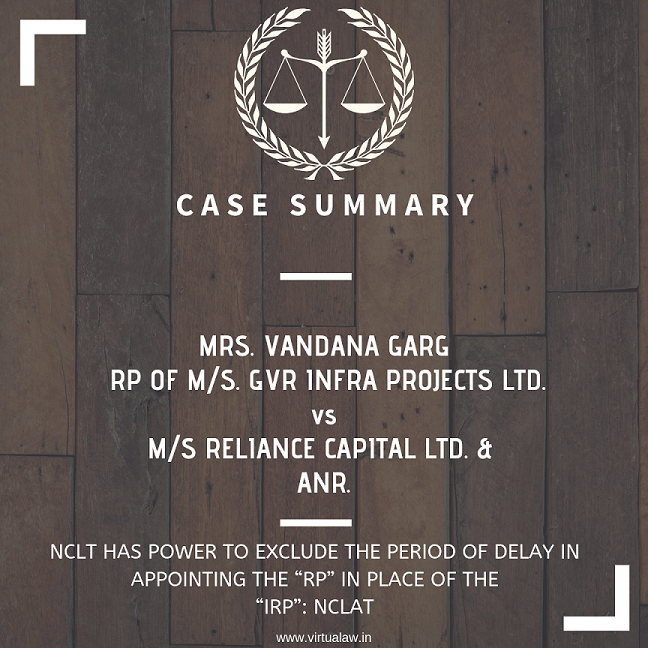 2. Brief Facts of the Case

It was submitted that non-appointment of “Resolution Professional” for 35 days after removal of ‘Interim Resolution Professional’ resulted in delay in proceeding and subsequently for calling for application(s) from the ‘Resolution Applicants’. It is further submitted that if the period is not excluded in the absence of any viable or feasible alternative, the Adjudicating Authority may have to pass order of liquidation.

The NCLAT issued notice on Respondent – ‘Reliance Capital Ltd.’ and another, however, nobody appeared.

The NCLAT relied on its order passed in the matter of Quinn Logistics India Pvt. Ltd., SCC Online, NCLAT – 243 wherein it was held as follows:

“… it is clear that if an application is filed by the ‘Resolution Professional’ or the ‘Committee of Creditors’ or ‘any aggrieved person’ for justified reasons, it is always open to the Adjudicating Authority/Appellate Tribunal to ‘exclude certain period’ for the purpose of counting the total period of 270 days, if the facts and circumstances justify exclusion, in unforeseen circumstances.”

In the instant case, the Hon’ble NCLAT had laid down an inclusive list of the grounds for which the intervening period can be excluded for counting of the total period of 270 days of resolution process:

(i) If the CIRP is stayed by an order of competent authority.

(ii) If no ‘RP’ is functioning for one or other reason during the CIRP, such as removal.

(iii) The period between the date of order of admission/moratorium is passed and the actual date on which the ‘RP’ takes charge for completing the CIRP.

(iv) On hearing a case, if order is reserved by the competent authority and finally order is passed enabling the ‘RP’ to complete the CIRP.

(vi) Any other circumstances which justifies exclusion of certain period.

However, after exclusion of the period, if further period is allowed the total number of days cannot exceed 270 days which is the maximum time limit prescribed under the Code.