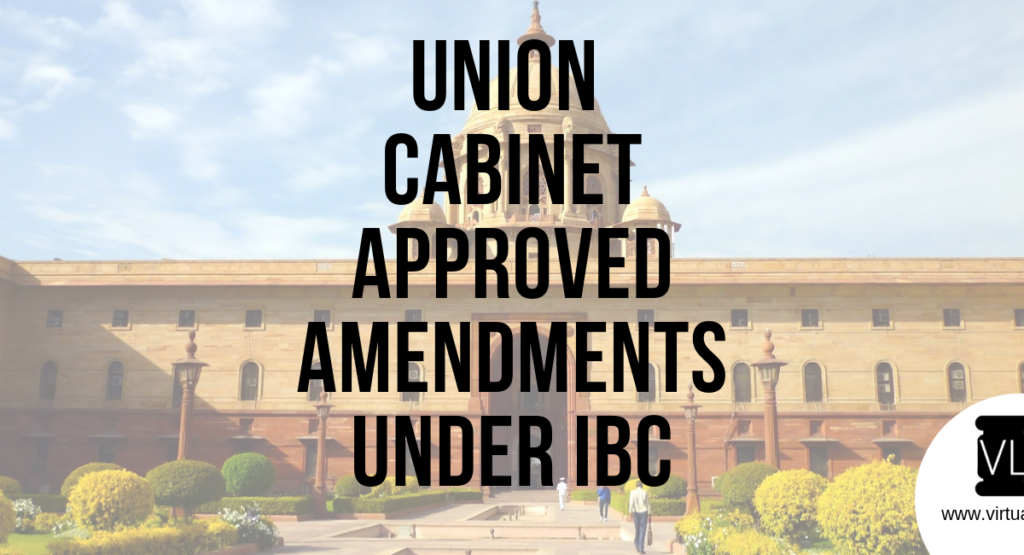 The Union Cabinet approved various amendments under the Insolvency Bankruptcy Code, 2016 (“IBC”) the salient feature of which are briefly provided through press release of the Ministry of Corporate Affairs dated July 17, 2019. It was stated in the press release that the amendments aim to fill critical gaps in the corporate insolvency resolution framework as enshrined in the Code, while simultaneously maximizing value from the Corporate Insolvency Resolution Process (CIRP) and that the Government is intending to ensure maximization of value of a corporate debtor as a going concern while simultaneously adhering to strict timelines.

The following amendments to IBC will be proposed to the Parliament for its approval:

The voting rights of those financial creditors like deposit holders or consortium lenders who have a trustee as their authorised representative, shall be decided by the simple majority (more than 50%) of the other Financial Creditors present and voting.

All the operational creditors and those financial creditors who dissented to the resolution plan shall receive at least the higher of the following amounts:

a. the amount that would have been received by them if the amount to be distributed under the resolution plan had been distributed in accordance with section 53 of the Code which deals with distribution of assets at the time of liquidation; or

b. the amount that would have been received if the liquidation value of the corporate debtor had been distributed in accordance with section 53 of the Code.

5. Expansion of powers of CoC:

The powers of the CoC are extended to include the commercial consideration in the manner of distribution proposed in resolution plan.

6. Resolution Plan to be binding on all the Stakeholders including Government:

The Amendment Bill will provide clarity that the resolution plan shall have binding effect on all the stakeholders including the Central Government, any State Government or local authority to whom a debt in respect of the payment of the dues may be owed.

7. CoC may decide to liquidate the Corporate Debtor:

The Amendment Bill will provide clarity that the Committee of Creditors may take the decision to liquidate the corporate debtor, any time after constitution of the Committee of Creditors and before preparation of Information Memorandum. Once Information Memorandum is prepared and expression of interest is received from the resolution applicants, it wouldn’t be prudent to decide to liquidate the corporate debtor.

These amendments make it clear that the Government is pro-active in achieving the objectives of the Insolvency and Bankruptcy Code, 2016.