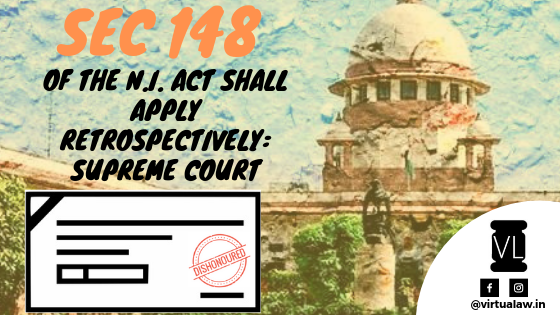 With the advent of technology and digital transformation of India and various digital payment options open in the Indian Economy, Businesses are slowly moving towards the online payment modes. However, cheque payments are so inherent in the Indian Businesses that it cannot be done away with at least for the next two decades.

For instance, in a sale transaction, if the consideration is paid through cheque and the VENDOR acknowledges the receipt of the said consideration, is that it? What if there is no balance lying in the account of the drawer of the cheque, then the same cheque is said to be bounced or dishonoured. Does it invalidate the sale deed? The answer is YES.

Whenever a cheque is dishonoured, timelines under Section 138 of the Negotiable Instruments Act, 1881, (“NI Act”) will trigger. The adjudication of cheque dishonour cases has never been easy. Keeping in view the speedy disposal of such cases, the NI Act has been amended time and again. However, the delay tactics adopted by the unscrupulous drawers of dishonoured cheques has not been done away with. Filing of appeal and obtaining stay of the lower court proceedings from respective High Courts has become a routine, causing unnecessary litigation in addition to the intolerable delays in payments to the payees of such dishonoured cheques and thereby leading to injustice and mocking of law.

To tackle the same, the Government of India amended the NI Act to strengthen the credibility of cheques and help better trade and commerce by introducing two new sections to the NI Act, viz., Section 143A and Section 148. The Statement of objects and reasons of the said amendment which came into effect from September 1, 2019, read as under:

In a recent ruling in the case of Surinder Singh Deswal @ Col. S.S.Deswal and others vs. Virender Gandhi, the Supreme Court of India ruled that the above amendment to the NI Act is procedural in nature hence no substantive right of appeal of the appellant has been taken away and/or affected.

Let us look into the brief facts of the case:

The original complainant Mr Virender Gandhi and the appellants Col. S.S. Deswal & Ors. had entered into a partnership agreement pursuant to which they operated their business in the name of M/s Bhoomi Infrastructure. When the complainant retired from the partnership, the existing partners had entered into a Memorandum of Understanding with the complainant pursuant to which the terms of retirement of complainant including settlement and mode of payment of retirement dues were agreed upon. In accordance with the same the accused issued certain cheques to the complainant, but all the said cheques were dishonoured and the complainant had to initiate legal action as required under Section 138 of the NI Act by filing a case before the Judicial Magistrate (1st Class), Panchkula. All of this happened before September 1, 2018, which is the appointed date for enforcement of the Negotiable Instruments (Amendment) Act, 2018 (“Amendment”). The said case was disposed by the Hon’ble Judicial Magistrate by way of detailed Judgement dated October 30, 2018 and by way of its order on quantum of sentence dated November 13, 2018, convicted the accused and sentenced them to undergo simple imprisonment for a period of two years and to pay, jointly and severally the cheque amount plus 1 % of the same as interest as well as litigation expenses to the complainant as fine for the offence punishable under Section 138 of the NI Act.

Aggrieved by the same the accused preferred appeal before the Learned Additional Sessions Judge, Panchkula (“Appellate Court”). By invoking newly inserted Section 148 of the NI Act, the Hon’ble Appellate Court by virtue of its order dated December 1, 2018, ordered for deposit of 25% of the amount of compensation awarded by the learned trial court in favour of the complainant in addition to furnishing of bail bond and surety bond. Aggrieved, the accused filed a revision petition before the Hon’ble High Court of Punjab and Haryana at Chandigarh on the ground that Section 148 of the NI Act shall not apply to the criminal proceedings already initiated prior to the Amendment. The High Court by way of a detailed order confirmed the order passed by the Appellate Court by dismissing the revision petition filed by the accused. In its final order dated April 24, 2019, the Hon’ble High Court relied on the order passed by the coordinate Bench of the High Court in CRR No.9872 of 2018, in the matter of M/s Ginni Garments and another Vs. M/s Sethi Garments along with other connected matters, decided on 04.04.2019 and held that the Amendment Act is purely procedural in nature and that the provision of Section 148 of the NI Act shall govern all the appeals pending on date of enforcement of this provision or filed thereafter.

The entire focus is on the applicability of Section 148 of the NI Act, which reads as below:

148. (1) Notwithstanding anything contained in the Code of Criminal Procedure, 1973, in an appeal by the drawer against conviction under section 138, the Appellate Court may order the appellant to deposit such sum which shall be a minimum of twenty per cent. of the fine or compensation awarded by the trial Court:

Provided that the amount payable under this sub-section shall be in addition to any interim compensation paid by the appellant under section 143A.

(2) The amount referred to in sub-section (1) shall be deposited within sixty days from the date of the order, or within such further period not exceeding thirty days as may be directed by the Court on sufficient cause being shown by the appellant.

VERDICT OF THE SUPREME COURT

Being aggrieved and dissatisfied with the orders passed by the Appellate Court and the High Court, the accused filed criminal appeal before the Supreme Court.

VirtuaLaw Take on the Ruling of the Supreme Court:
It is quite evident from the Amendment Act that unnecessary and long-drawn litigation in respect of cheque dishonour cases shall be reduced and the Supreme Court rightly endorsed the same.