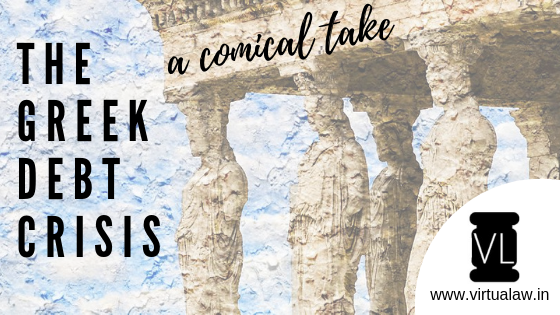 A debt crisis is a situation in which a country is unable to pay back its government debt. It is not an over-the-night event which pushes an economy into the traps of debt crisis. A series of events, which at the moment of happening do not seem to endanger economy, lead to a crisis when the economic system fails to take into consideration the risk factors.

The endeavour below is to explain how a simple issue got complicated and turned into a Crisis due to the failure of economic system.

Alexa is the proprietor of a bar. She realises that virtually all of her customers are unemployed alcoholics and, as such, can no longer afford to patronise her bar, and is on the verge of being broke.

To solve this problem, she comes up with a new marketing plan that allows her customers to drink now, but pay later. She keeps track of the drinks consumed on a ledger (thereby granting the customers loans).

Word gets around about Alexa’s “drink now, pay later” marketing strategy and, as a result, increasing numbers of customers flood into Alexa’s bar. Soon she has the largest sales volume for any bar in Athens, and all is starting to look rosy.

By providing her customers freedom from immediate payment demands Alexa gets no resistance when, at regular intervals, she substantially increases her prices for wine and beer, the most consumed beverages. Consequently, Alexa’s gross sales volume increases massively.

A young and dynamic vice-president at the local bank recognises that these customer debts constitute valuable future assets and increases Alexa’s borrowing limit. He sees no reason for any undue concern, since he has the debts of the unemployed alcoholics as collateral.

At the bank’s corporate headquarters, expert traders figure a way to make huge commissions, and transform these customer loans into Drink bonds and Alki bonds. These securities are then bundled and traded on international security markets. The new investors don’t really understand that the securities being sold to them as ‘AAA’ secured bonds are really the debts of unemployed alcoholics. They have had a ‘rating house’ certify they are of good quality.

Nevertheless, the bond prices continuously climb, and the securities soon become the hottest-selling items for some of the nation’s leading brokerage houses. One day, even though the bond prices are still climbing, a risk manager at the original local bank decides that the time has come to demand payment on the debts incurred by the drinkers at Alexa’s bar. He so informs Alexa.

Alexa then demands payment from her alcoholic patrons, but, being unemployed alcoholics, they cannot pay back their drinking debts. Since Alexa cannot fulfil her loan obligations she is forced into bankruptcy. So she now is broke. The bar closes and the 11 employees lose their jobs.

Overnight, Drink bonds and Alki bonds drop in price by 90%. The collapsed bond asset value destroys the bank’s liquidity and prevents it from issuing new loans, thus freezing credit and economic activity in the community.

The suppliers of Alexa’s bar had granted her generous payment extensions and had invested their firms’ pension funds in the various Bond securities. They find they are now faced with having to write-off her bad debt and with losing over 90% of the presumed value of the bonds.

Her wine supplier also claims bankruptcy, closing the doors on a family business that had endured for three generations. Her beer supplier is taken over by a competitor, who immediately closes the local plant and lays off 150 workers. Fortunately though, the bank, the brokerage houses and their respective executives are saved and bailed out by a multi-billion euro, no-strings attached cash infusion from their cronies in government.

The funds required for this bailout are obtained by new taxes levied on employed, middle-class, non-drinkers who have never been in Alexa’s bar.

The classic joke of economics!

The funds required for this bailout are obtained by new taxes levied on employed, middle-class, non-drinkers who have never been in Alexa’s bar.

The classic joke of economics!

Disclaimer: It is the reader’s responsibility to verify their own facts. The views and opinions expressed in this blog are those of the authors.